As Featured in the Calgary Herald 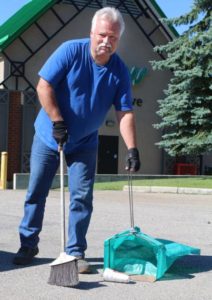 Joe Winch earned his living as a janitor with the Calgary Board of Education. To help support his growing family he made extra money by picking up litter and shovelling snow at commercial properties and churches close to his home.

His sons, Dale and Brian, would often join their father and were a big help as he picked up more clients.

When Joe Winch died, Dale thought he should carry on the small business. He approached his father’s customers and launched Quality Maintenance, a company now celebrating 30 years of providing after- hours litter control.

Brian had started his own snow removal and litter control business but sold that venture to join his brother at Quality Maintenance in 1989 to “see how big we could grow.”

Today, the family- run company looks after 150 commercial properties with a daily, on- foot service that specializes only in litter pickup.

The majority of its accounts are commercial properties like strip malls and small office complexes that property management companies hire the brothers to take care of.

Some have been clients for more than 20 years. As developments get sold, some choose to go in- house and use their own maintenance crews or select a competitor, though many choose to return after finding it difficult to replace the quality of service they’ve received.

The Winch brothers provide a very personal service with their trusted crew of around 10 others. “Quality is never an accident. It is always the result of high intention, sincere effort, intelligent direction and skillful execution,” said Brian, who acts as operations manager for Dale.

Fighting the never- ending battle with litter is key, but the company also acts as an extra set of eyes at properties. Observing any graffiti, vandalism, burned- out lights, illegal dumping or overflowing Dumpsters is reported. Quality Maintenance understands litter- free grounds helps attract and keep tenants while creating positive thoughts within the community.

It’s a simple but very efficient business. Brian shows me a photograph of himself at work in the 1980s using the same hand tools he uses today — a litter scoop and a broom.

People’s habits have not changed much either. Brian said people still walk out of a convenience store, unwrap a package of cigarettes and throw away litter despite standing next to a garbage receptacle. He reckons he’s picked up tons of cigarette butts over the years; even watched people dump their vehicle ashtrays on the lot while he has been picking up.

Not too many people see Brian or his workers as they usually work after hours, seven days a week, picking up litter from parking lots, sidewalks and landscaped areas so tenants feel good about walking into their buildings each morning.

Picking up litter is not just another job for workers who might not be too enthused about doing a little extra. Dale and Brian are proud of the service they perform; one which has given them a good living and allowed them to spend quality time with their families.

*Reprinted with permission of The Calgary Herald.